Balanced in mid-air, he was like a bird, light, on his bike. He’d climb to his feet effortlessly, as the tires burned, smoked rubber at great speed. It was acrobatic, theatre, entertainment, and I was hooked. Drew Stone made it look so easy in his stunt film, Urban Street Bike Warriors (USBW). I had to try.
It was 2002, or maybe 2003. I bought a speedy little Suzuki to practice my act. If I succeeded in managing the throttle, even to an audience consisting of just myself, it would be epic. I thought it was a good idea at the time. After the countless attempts, numerous crashes, and requisite injuries riders acquire in their stunting career, it was clear I might not be cut out of Stone. Surrender? Not likely.
This time, instead of getting behind the bike, I got behind the lens; as a filmmaker, something I love to do. Wanting to expand on the style of USBW, I started to film stunts and riders, in my native Vancouver, British Columbia. I called the documentary Throttle Trauma and débuted it in the province in 2006.
The screening was at the city movie theatre booked for the evening. All seats were taken. Some shuffled their weight from foot to foot, standing in the aisles. When the flickering sound of the film reel filled the theatre, the crowd went nuts. Friends, family, enthusiasts, riders and bike lovers nearly cheered over the interviews and video highlights. That night I saw two things: the Vancouver stunt riding community was strong and celebratory, and the public was interested to know their story and how they came to stunt riding as a part of life. Here, the wheels turned again. But this time I knew how to get a grip. I started to expand my vision.
The second film would include other stunt riding communities, starting with the United States. Although I enjoyed life on the road with the B.C. riders, living in and out of airports and out of a suitcase was another thrill entirely. There was a mutual excitement growing stronger with every flight. I was the Canadian filmmaker who wanted to help the American stunt rider community story to be told. It was an appreciation on both ends which had a stupendous outcome: Throttle Trauma 2: Street Kings was released in 2008, and in 2009 earned two Xtremey awards in the Best Rider and Best Film categories.
The Best Rider award was announced first. The MC announced “Nick Apex” as the recipient. Still on an adrenaline high, Nick shot up from the seat beside me to claim his honor. (Earlier that night, visiting Nick in Las Vegas, we had run into “Crazy” Martin who insisted to drive to California, where the Xtremeys were being held. Four hours later and few breaths taken, we had sped into the auditorium getting settled just as Nick was about to have his moment.)
When he returned, Nick turned and smiled to me and said “Congrats! You won!”
“Fuck off” I responded in the happy free fall of a roller coaster ride on the interstate.
“No! Look! You won!”
I turned the award towards me to read the engraving. I was shocked. In a mix up, the MC had given Nick the award for Best Film, Throttle Trauma 2: Street Fighters. When Best Film was announced, I strolled back to Nick with his Best Rider award in hand. Made in earnest, the mistake left me elated that evening as rider, film and filmmaker had been recognized among and by his peers. The community and voice could be as one, and that night, sung to me in sleep as I dreamt how the third documentary would be told.
Since it started with Drew Stone, it needed to end with him too. Nearly eight years since the first film, I had gained another perspective. Stunt riding had to go beyond definition if it were to become and remain culturally significant. It required re-presentation of what it is all about, locally and internationally. To do so, I would have to get at the very thing that makes the community so unique: the people who are part of it.
With tripod, backpack, camera and laptop, I set off to New York to interview Drew and many other influential riders too. Encouraged, I opened the pages of my passport and watched it get stamped when traveling to Spain, France and Poland. Leaving a life I knew so well for an adventure that would keep me moving in North America and Europe for nearly a year was perhaps one of the riskiest and most satisfying stunts I have attempted in my life. Balancing in the air well-seated and sure-footed, I was really flying now. I had to try.
Currently back at home editing the third and last documentary, I relive the hospitality I experienced and talent I got to witness during my travels. Although miles away from the many people and places included in the film, the distance between myself and the communities and respect for the sport, is as short as the projection screen and the viewer, the story and the audience, the effort and the message I hope to leave with you: Throttle Trauma 3: Once More We Survive.

Thank-you for all the support throughout the years. It’s great taking this ride together.

See you in the theatres soon! 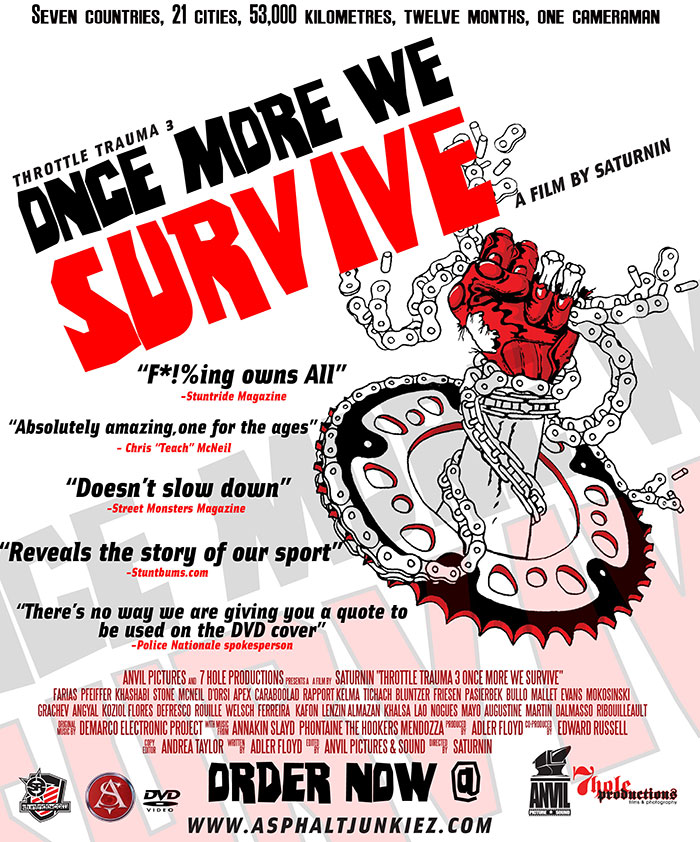